Last year, we issued a call for action, supported by major global health research funders and institutions, that advocated the promotion of “fair and equitable collaborations between research organisations, particularly between external research institutions and their local partners in high- and low-income settings”. Last month many such collaborations had their funds slashed, in some cases to zero. How can this possibly be justified?

(Read our call for action)

Back in January 2020, just two days before the World Health Organization declared COVID-19 to be a ‘Public Health Emergency of International Concern’, we published the findings of our two-year inquiry into the ethical conduct of research during global health emergencies. At the time, there was little public awareness of the central role of research in the emergency response – attention was more focused on pressure on hospital beds and the imposition of unprecedented public health measures in China.

The past year has, though, seen research emerge centre-stage as part of the global emergency response. The progress of vaccine trials, and the ongoing monitoring of possible side effects as vaccination programmes are rolled out, is daily headline news around the world. The RECOVERY trial in the UK has identified effective treatments that have quite literally saved thousands of lives. Other kinds of research – sequencing viral genomes, developing better diagnostic tools, understanding the impact of pandemic measures on different communities – may be more likely to slip under the public radar, but still feed into crucial political and policy debates. There is wider discussion and understanding of the many social, political, and environmental factors, including climate change and urbanisation, that may contribute to the emergence of another ‘Disease X’ – a disease currently unknown to humans that could cross the species barrier and cause the next pandemic.

And this is why the announcement last month of immediate and devastating cuts to hundreds of collaborative global health research projects that are already underway has drawn such widespread criticism, anger and disbelief. The allocation of the overseas aid budget received by UKRI from the Department of Business, Energy and Industrial Strategy (BEIS) to fund vital development research has been reduced to a total of £125 million for 2021/22, leaving a shortfall of £120 million in existing commitments to collaborative global health research.

The central theme of our report is that what is ethically at stake in research goes far beyond traditional ‘research ethics’ issues, such as study design, consent processes, and independent ethical scrutiny (important as these are). More fundamentally, we argue that the issue of power and influence in the whole research endeavour – the questions of whose voices are heard, whose needs are held to matter, and who ultimately benefits from research – is profoundly ethical, and yet often overlooked. This is true of all research but never more so than in emergencies, where those most affected are often the most marginalised and the least likely to have their voices and interests taken into account.

The importance of equitable international partnerships for ethical research

We made many recommendations, to many different institutions (including governments, funders, research institutions, humanitarian organisations, and publishers) who, to a greater or lesser degree, exercise power and influence over how research is conducted. For the purposes of this blog, I want to highlight one conclusion, and one recommendation. The conclusion was that all these organisations are themselves duty-bearers: that they have responsibilities themselves to act in ways that support and promote ethical research – and that these responsibilities need to be embedded in all of the day-to-day practices through which they operate. And the recommendation is that these organisations should promote equitable international partnerships through whatever means are open to them: whether as funders, employers, publishers, governments, or international agencies.

We made this recommendation for ethical reasons. If those most affected by emergencies are truly to be able to influence research carried out in their name, the centre of gravity of research influence must shift to the places where research needs first arise – which in many cases is the global south. The long-term aim must be for researchers in the global south to have the same kind of access to funding, and be supported by the same forms of infrastructure and prospect of career progression, as their counterparts in the global north. In the more medium-term, genuinely equitable partnerships between institutions in global north and south – where global south researchers’ voices have equal influence in the partnership and they are never simply used as data-collectors for others’ projects – offer important means of developing a more equitable research agenda, and of supporting and strengthening research capacity throughout the world.

And yet, it is research partnerships such as these, supported by well-respected initiatives such as the Global Challenges Research Fund, that are now threatened by the ODA cuts. Twitter (see #ODAcuts) is full of examples of the devastation being wrought: on projects concerned with anti-microbial resistance in India and China; on meningitis forecasting in Africa; and on improving water security in three continents, to name just a few. Trust built up, in some cases over decades, between researchers in the UK and partners in many other countries has been seriously undermined. Research participants’ consent to take part in and contribute to studies that will now be abandoned, has been abused.

I said above that the arguments in our report for equitable research partnerships were based on ethical reasoning. If these arguments do not convince in the political arena, there is also the argument of simple self-interest. If the COVID-19 pandemic has taught us anything, it is surely that the faraway spillover of disease from a bat or pangolin into humans, or growing rates of antibiotic resistance in another continent, is a direct threat to everyone – including the UK. It is precisely the kind of collaborative research that is now being cut that enables us to prepare better for these future challenges. As many, including those in Government, have said: “No one is safe until everyone is safe”.

The Nuffield Council on Bioethics warmly welcomes new guidelines by UKRI and UNICEF that aim to help grant reviewers consider ethical issues when reviewing proposals for research in fragile and conflict-affected contexts.

Nuffield Council's ethical compass to be adopted in the Philippines

Our ethical compass - proposed in our report on global health emergencies as a way of using shared values to work through ethical dilemmas – is to be adopted as a guide for Research Ethics Committee processes in the Philippines. 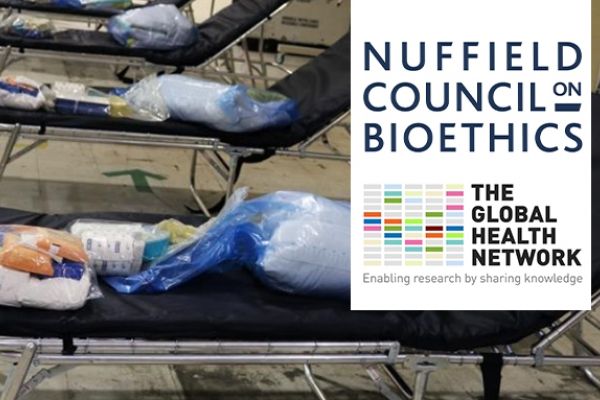 Research in global health emergencies: ethical issues - one year on

Just over a year ago we closed our 2-year long in-depth inquiry and published our final report 'Research in global health emergencies: ethical issues'.

How ethically challenging are challenge trials?

Just at the point where vaccine trials are showing promise, levels of infection circulating in the general population in the UK are relatively low. This is obviously good news from many perspectives – but makes the next stage of testing more difficult. Is one possible answer human challenge trials?

Funder principles for research in epidemics and pandemics

We welcome the funder principles for research in epidemics and pandemics, set out by the UK Collaborative on Development Research (UKCDR) and the Global Research Collaboration for Infectious Disease Preparedness (GloPID-R).

We, together with The Global Health Network, have launched a Spanish translation of a new e-learning course for researchers covering the core ethical issues that arise when conducting research in global health emergencies.

Global health emergencies aren’t restricted by language. As we see with the current COVID-19 pandemic, the virus isn’t limited to one country or continent – it affects everyone.