Recently, a group of leading healthcare organisations reported a 30% rise in worldwide measles cases from 2016. Measles is a highly contagious viral disease that remains a significant cause of death in children worldwide, despite the availability of an effective vaccine that has a high level of safety. In the UK, the measles vaccine is voluntary and it is administered to pre-school children as a measles-mumps-rubella (MMR) combination.

New data from the World Health Organization (WHO) shows that reported cases of measles rose by 300% in the first three months of 2019, compared to the same period in 2018. Rises were seen across all regions including those that had previously eliminated or were close to eliminating the disease. The WHO listed a number of contributory factors to the rise in cases, including ‘vaccine hesitancy’ and complacency.

The WHO recently declared ‘vaccine hesitancy’, which they describe as “the reluctance or refusal to vaccinate despite the availability of vaccines”, as one of the world’s top ten global health threats in 2019. There are many reasons why parents might not want to vaccinate their children, including religious beliefs, distrust of big pharma, and worries about side effects and whether a child’s immune system will cope. In the last few decades, we’ve seen the rise of the ‘anti-vax’ or ‘anti-vaxxer’ movement – parents choosing not to vaccinate their children because of concerns about the safety of vaccines, which are often proliferated through social media.

Infectious disease was a case study in the Nuffield Council on Bioethics’ report on public health, in which we examined the main ethical issues associated with vaccination. In particular, we looked at the tension between individual choice over receiving or not receiving a vaccine, and the potential benefits or risks to the community; and the policy options for different approaches to vaccination programmes.

Vaccination programmes protect individuals against infection, and in many cases, also bring about population immunity. Population or ‘herd’ immunity occurs when a sufficiently high proportion of the population is vaccinated, so in the case that an infected person is introduced into the population, there’s no onward transmission. If the number of people refusing vaccination rises, population immunity may not be achieved, and this can increase the risk of outbreaks occurring. This can put those who are not vaccinated for medical reasons - such as children undergoing chemotherapy or with reduced immune systems - at increased risk.

In our report, we proposed a stewardship model to inform public health policies. The central premise is that the state has responsibility to look after the health of all its citizens – both collectively and individually –and public health policies should aim for the least intrusive means possible to achieve the required health benefit.

The case of vaccination illustrates important limitations of purely voluntary approaches in the context of public health, because the consequences of decisions about vaccinations affect not only the individual,but others around them. More stringent public health approaches tend to shift the emphasis away from protecting the interests of the individual towards providing collective benefit.

At the time of our report, there wasn’t sufficient justification to recommend that the UK moves away from a voluntary approach to childhood vaccination. We said that if policy-makers wanted to go beyond simply providing information and encouragement, this might be justified on the basis of minimizing risks of harm to others, or protecting the health of children and other potentially vulnerable people. A case-by-case assessment will always be required and should take into account: the risks associated with the vaccination and the disease itself, and the seriousness to the threat of the disease to the population. We identified two circumstances in which quasi-mandatory vaccination measures are more likely to be justified. First, for highly contagious and serious diseases and secondly, for disease eradication if the disease is serious and eradication is in reach.

Returning to the example of measles, eradication must be viewed on a global scale - outbreaks can’t be contained within pockets. Recent outbreaks highlight how easy it can be to overturn the gains made over several years toward global and regional measles elimination goals (such as the Global Vaccine Action Plan) which set targets to eliminate measles in five WHO regions by 2020). For example, earlier this year, an unvaccinated family reintroduced measles to Costa Rica, which had previously gone five years without a case.

As mentioned above, a contributor to the rise in measles cases is concern about the safety, in general, of vaccines. The proliferation of misinformation through media has had a huge effect here. The trust that people have in institutions and experts, and the ways in which people get their information, is changing. Social media, where influence is determined by likes and shares, has proved something of a game changer since we published our report in 2007. At the time, we said that anyone reporting on health research has a duty to communicate findings in a responsible matter. This should still apply.

Using the principles of the stewardship model, social media organisations have a responsibility to combat misinformation about vaccines. It’s positive to see recent announcements from Facebook, YouTube and Instagram to say that they are taking action to tackle vaccine misinformation on their platforms. For example, Facebook has blocked certain hashtags associated with misinformation such as #vaccinescauseaids. While much of the limelight has been on how social media spreads misinformation, it can also play a positive role in combatting it. Denmark and Ireland have turned around falling HPV immunisation rates through successful media and social media campaigns. Recently, UNICEF – in partnership with the Bill and Melinda Gates Foundation, the WHO and Gavi – launched a social media campaign in which every link or share using the hashtag #VaccinesWork in April, the Bill and Melinda Gates donated $1 to UNICEF, up to $1 million.

Two scholars of the Hastings Center in the US recently wrote an article in Slate suggesting that discussions about the safety of vaccines ought to be approached through engaging the values – beliefs about what should guide our lives and societies – of parents. They suggest that pro-vaccination discourse fails to recognise or explore the role that values play in decisions about whether parents should vaccinate their children. For example, people will care to different extents about the risk of an allergic reaction, or about someone hurting their child with a needle. Yet, policy generally assumes people see the costs and benefits of vaccination in the same way. The authors suggest therefore that ‘myth-busting’ is likely to be threatening and infuriating to those opposed to vaccination. They urge experts to stop haranguing people, to address their interests, and to put values up front.

Meanwhile, some governments have or are thinking of introducing more stringent measures to try to force parents to vaccinate their children. For example, following a six-month measles outbreak in New York’s Rockland County, public health officials have banned unvaccinated children under 18 from public spaces. Germany’s Health Minister recently introduced a draft law that would make vaccination against measles compulsory for all eligible children attending nurseries and schools, as well as teachers, educators and medical staff at hospitals and surgeries. Parents who refuse to vaccinate their children could be face fines of up to €2,500.

Clearly there are many different approaches to this issue, but we will need inventive ways to approach the debate and to tackle misinformation to turn around trends in measles immunisation. It’s also important to bear in mind that above all, parents simply want to do the best for their children.

If you’re interested in this topic, our Director, Hugh Whittall, recently took part in an episode of BBC Radio 4’s The Briefing Room on Should vaccinations be compulsory? Heidi Larson, a member of our global health emergencies working group and founder of the Vaccine Confidence Project, was also featured on the episode. Heidi wrote an article about misinformation for Nature - The biggest pandemic risk? Viral misinformation (credit due for the Ireland/Denmark example).

Public health Vaccination
Sign up to our newsletter
Back to Blog

A bioethics view on the latest covid vaccination policies

With the UK Government due to announce its Covid winter plan, Danielle Hamm, Director of the Nuffield Council on Bioethics, provides a bioethics perspective on recent and expected policy developments relating to covid vaccination.

Trust in those developing, offering, and promoting vaccines plays a key role in decisions about the uptake of vaccines, says a new briefing note from the Nuffield Council on Bioethics. 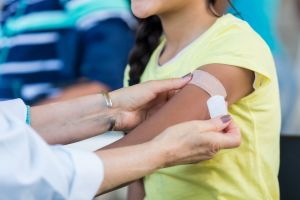