Anyone wanting to cut down on meat this Veganuary or beyond might be looking to fill the gap with meat-free products that look and taste like meat.

The Nuffield Council on Bioethics’ latest briefing note, published today, takes a closer look at the ethical issues raised by developments in creating meat alternatives, including their implications for health, the environment and animal welfare, and their potential role in the broader food system.

There is growing interest and investment in the meat alternatives industry, and new products that are closer than ever to meat in taste and texture are starting to hit UK shelves. Plant-based products, such as the Beyond Burger and Impossible Burger, use novel ingredients and innovative processes to mimic the qualities of meat. Cultured meat alternatives, which are grown from the cells of an animal and seek to imitate meat without the slaughter of animals, are not yet available to buy but are in a rapid phase of development.

How ethical are meat alternatives?

For many people, eating a meat-like product that has not involved the slaughter of animals is an attractive prospect. While those seeking meat alternatives may also have good intentions towards the environment or their health, the briefing note highlights that more evidence is needed to determine if meat alternatives really are more sustainable and healthier than conventional meat in the long-term.

Some meat alternatives offer health benefits over conventional meat, such as providing fibre and less cholesterol. However, these products are usually highly processed and can contain the same amount of calories and saturated fat as beef burgers, and high levels of sodium.

Meat alternatives look promising in terms of taking up fewer natural resources than intensive livestock farming, although this will depend on the energy requirements of production and whether the ingredients used involve intensive crop agriculture. There is the possibility that the availability of meat alternatives might increase people’s overall consumption of meat and meat-like products, which could have implications for the environment and health.

People are becoming increasingly engaged with the environmental, animal welfare and health implications of their food choices.

The briefing note highlights that meat alternatives are just one approach to try to reduce the impact of intensive livestock farming and eliminating the need to slaughter animals for meat. They should be considered alongside other potential solutions for achieving food sustainability, such as educational initiatives to reduce meat consumption and waste across the food system; increasing the consumption of minimally-processed plant-based diets; alternative sources of protein such as insects; as livestock feed or in food products; more sustainable farming methods and addressing fair distribution of food resources for people across the world.

Hugh Whittall, Director of the Nuffield Council on Bioethics, said:

“Efforts to reduce people’s meat consumption have so far resulted in relatively small changes in eating habits. Rather than trying to change people’s behaviour, some manufacturers of meat alternatives are trying to combat the adverse effects of meat production by changing how meat or meat-like products are produced.

“Meat alternatives can potentially offer more sustainable and healthier choices than conventional meat, but we need a lot more evidence to assess their true impact in the longer term. It might be that people aren’t worried if these products aren’t any healthier than meat, if they are eating them as part of a balanced diet. But we need transparency and accuracy in marketing and labelling so that people are not misled or confused. As meat alternatives become more like meat, and cultured meat reaches the market, the potential of these products to disrupt meat production could be ground-shifting and something to be monitored over the coming decade.”

About the Nuffield Council on Bioethics

The Nuffield Council on Bioethics is an independent body that has been advising policy makers on ethical issues in bioscience and medicine for more than 25 years. We are funded by the Nuffield Foundation, the Medical Research Council, and Wellcome.

This is the seventh in a series of bioethics briefing notes published by the Nuffield Council on Bioethics.

Meat alternatives
Sign up to our newsletter
Back to news

Our latest bioethics briefing note looks at the ethical and social issues around emerging meat alternatives. 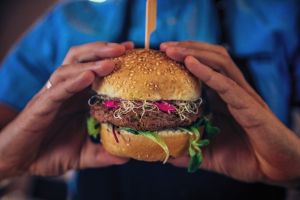 It's Veganuary! The name – which has been hard to avoid anywhere this month – has be...

Unpacking the ethics of food sustainability: health, harmony and beyond

The Nuffield Council of Bioethics runs a number of events and activities as part of a horizon-scanni...