This report considers what the Government, industry and individuals should do to enable people to lead a healthy life.

Whether a public health measure is acceptable depends on whether or not it is ‘proportionate’. For example, will the benefits of the measure be enough to justify the interference in people’s lives and the financial cost? And how likely is it that the measure will achieve its aim?

We propose an ‘intervention ladder’ as a useful way of thinking about the different ways that public health policies can affect people’s choices. Interventions that are higher up the ladder are more intrusive and therefore require a stronger justification: 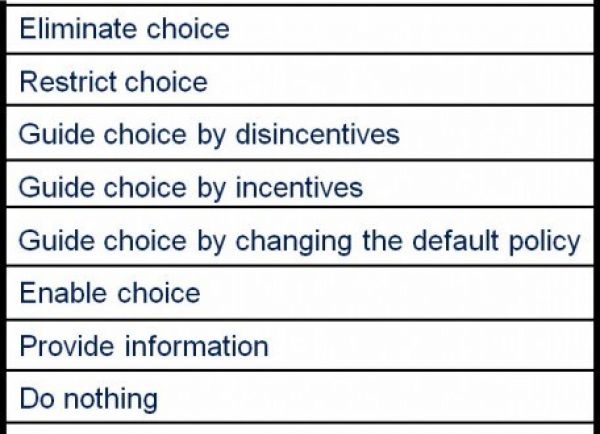 The 'intervention ladder' - See Chapter 3 for the full version

Evidence on the benefits and risks of a public health policy is often incomplete, ambiguous and contested. It may not always reveal which policy would be the most effective. Poor evidence should not, however, be used automatically as a reason for doing nothing, because this too can have negative consequences for people’s health.

Policies should be based on the best available scientific evidence. Doing nothing is also an active policy decision, and so both action and inaction require justification. Monitoring of public health interventions is crucial, especially where the evidence is weak.

The role of industry, the media and other parties

Many industries produce and market products and services that can affect health. For example, the advertising, pricing, composition and availability of different foods in shops and restaurants all influence people’s diets and food habits.

In addition to the state, other organisations, especially businesses, have obligations towards society. Many businesses already have social responsibility policies. Where industries fail to meet reasonable standards in these responsibilities, it is acceptable for the state to intervene through regulations.

The media, along with other organisations that publish information or claims about health and health policies, can also influence public health. These groups should present evidence and information accurately, clearly and fairly.