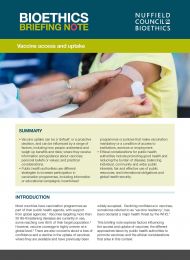 Whether or not people take up the offer of a vaccine, for themselves or their children, can be a ‘default’ or a proactive decision, influenced by a range of factors.

For individuals, the most direct benefit of vaccination is the protection from infection and disease for themselves and the people they are close to, and the knowledge of having such protection. Where vaccination reduces transmission of disease, individuals might value the opportunity to help protect others in their wider network or community. In some cases, particular groups are offered a vaccine that offers more protection to others than to themselves. For example, a vaccine is offered in pregnancy that can give the baby immunity against whooping cough, and all children are offered vaccines against rubella which poses more serious risks in pregnancy, and against mumps which can reduce sperm count and fertility. Taking part in collective efforts to prevent diseases as a wider public good might also be considered a benefit to individuals. One early study of attitudes to a potential COVID-19 vaccine found that perceptions of the risk of COVID-19 to others were associated with an intention to get vaccinated, suggesting that altruism plays a role in vaccine decision making.

The risk of diseases and their effects are key factors in motivating vaccination uptake. However, real and perceived risks are also key factors motivating people to reject the offer of vaccination. Though a high degree of safety and efficacy is required before vaccines are approved and offered in the wider population, some risks and individual variation in responses to vaccines remain, as is recognised in the UK by the existence of a Vaccine Damage Payment Scheme for individuals who have become severely disabled as a result of vaccination.

How people understand and interpret risks, for example of side effects that are rare but severe, can vary. Incidents that coincide with vaccination, but where the causality is not immediately clear, can also cause concerns that linger even after evidence that the vaccination was not responsible has emerged. Public health communication around emerging risks where evidence is limited can be challenging. This was evident in the different approaches taken by European countries in response to reports of blood clots after receiving the Oxford/AstraZeneca COVID-19 vaccine, with some suspending use of the vaccine on the grounds that this was a precautionary measure, while others proactively sought to reassure the public of the safety of the vaccine.

Given that vaccines are generally offered to healthy people, and that many diseases being vaccinated against will be unfamiliar (particularly where vaccines have contributed to keeping infection levels low), some might consider the risk of disease worth running or conclude that risks or possible side effects associated with vaccination are a greater threat to them.

Particular uncertainty can arise around new vaccines. The pace at which COVID-19 vaccines have been developed and approved for use has been a source of concern for some. This may have been exacerbated by public messaging that aimed to manage expectations of how quickly a vaccine might be developed in the early stages of the pandemic, and then failed to make clear how the compressed timescale was made possible. However, according to the Office for National Statistics, positive vaccine sentiment has increased significantly in the UK during the first three months of the COVID-19 vaccine rollout.

A cultural shift towards a more individualised view of medicine and healthcare might also be reflected in the way people make decisions about vaccines. For example, people might attach greater significance to factors specific to them or their child(ren), such as personal circumstances, family history, and their previous interactions with the healthcare system. ‘One size fits all’ programmes based on large-scale scientific studies might not be perceived as reassuring or relevant for those taking this view.

Where people source or receive information about vaccines and the framing or accessibility of this information can be a significant factor in their decision about whether or not to take them up.

Studies have found that people who received information about diseases and vaccines from official sources, particularly healthcare professionals or others in community support roles, were more likely to think vaccines were safe and to be vaccinated. The extent to which this information is tailored to communities might be important: for example, whether such information is provided in accessible formats; or translated into minority languages (see box 1: practical considerations and barriers).

Historically, traditional news media has been particularly influential. A significant drop in uptake of the MMR vaccine in the UK in the early 2000s was linked to media coverage of claims, subsequently shown to be incorrect, that the vaccine was responsible for autism in some children. Similar links have been made between media coverage of vaccine controversies and low levels of confidence in vaccines in France. However, recent studies have found that relying on mainstream media for news is generally associated with positive attitudes to vaccines. The extent to which stories are being reported by specialist medical or science journalists might have an impact on how vaccine stories are covered in non-specialist media.

The internet, social media platforms, and messaging applications have enabled rapid global sharing of vaccine-related content, including public health information and views. Social media encourages private users to actively participate in creating and circulating influential messaging. This can help to inform users, but can also contribute to rapid distribution of misinformation or contradictory messages, including between friends, family, or members of a community. Internet trolls and bots have been found to promote negative and polarised messages around vaccination as a way to incite political discord, or as clickbait to distribute malware or commercial content. Research has shown that exposure to misinformation on social media can cause confusion and anxiety about vaccines and lead people to delay or refuse vaccination.

A global survey of vaccine confidence levels found that higher levels of vaccine uptake in 43 countries were associated with trusting healthcare workers more than family, friends or other non-medical sources for medical and health advice.

Levels of trust can vary across different groups in society. For example, recent studies of vaccine intentions in an ethnically diverse community in the UK with high levels of deprivation found that there was a general lack of trust in the Government and the local council, but strong levels of trust of the NHS, local hospitals and schools. Given that most vaccines are delivered by GPs or nurses, trust in primary care might be particularly important. Vaccine hesitancy among people from some minority ethnic backgrounds during the roll out of COVID-19 vaccines has been linked to a lack of trust resulting from systemic racism and discrimination, historical abuses such as the Tuskegee syphilis study, underrepresentation of minorities in vaccine research, and negative experiences in the healthcare system.

A lack of trust can relate to suspicions about motives and interests driving vaccination programmes, such as perceptions of the influence of pharmaceutical companies. Trust can be affected by previous interactions with healthcare systems, for example, where people have experienced inequality of access to, and quality of, healthcare. Some view vaccination as an attempted ‘quick-fix’ technical solution which fails to address deeper structural social and cultural problems that affect health and disease, such as inequalities of wealth, housing, and education. Some individuals and groups critical of vaccination question the value of trust in the context of vaccination programmes, and frame it as herd mentality or the unquestioning acceptance of mainstream views, contrasting this with ‘free thinking’, taking responsibility for one’s own health, and informed parenting.

Trust can also be damaged by safety incidents relating to vaccines and how these are communicated. For example, in 2017 the dengue fever vaccine Dengvaxia was found to pose a potential risk to people who had not previously been exposed to dengue after it had been administered to more than 800,000 children in the Philippines as part of a vaccination campaign targeting a severe dengue epidemic. The announcement was met with public outrage, and was followed by significantly reduced uptake of routine vaccines against other diseases recommended by the national immunisation programme, as well as of Dengvaxia.

Other values and attitudes

Social norms might be significant in affecting people’s decisions, for example in communities where vaccination is seen as the normal thing to do. Religious and philosophical beliefs and values can also influence decisions, for instance, through obligations to protect life or ideas around the purity of the body. Some are concerned that processes or materials in, or involved in the production of, some vaccines might conflict with their diet, personal values or religious teachings. Religious and animal rights organisations in the UK have issued statements to address such concerns and encourage their followers to accept vaccines when they are offered. Ideas about naturalness are sometimes invoked as a reason to reject vaccination, for example in preferences for natural immunity or for natural risks over ‘artificial’ ones.

Vaccine uptake can be affected by practical considerations or barriers (see box 1). These might be common across the population or affect particular groups or local communities more than others.

Surveys of healthcare professionals, parents and those eligible for adult vaccinations in the UK have found that common barriers to vaccination include: