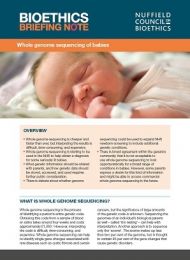 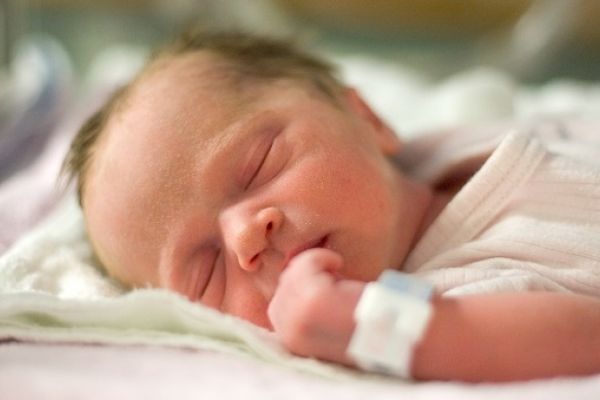 Some of the ethical issues to consider with the increasing use of whole genome sequencing in babies are summarised in this section.*

Different parties could be affected by the use of whole genome sequencing in babies:

What genetic information should be shared with parents?

While it is difficult to establish a clear picture of international practices, there appears to be a general consensus within the medical genetics community that only information about childhood conditions should be shared with parents following whole genome sequencing of sick babies (see Box 2). However, there are different views on which childhood conditions should be included in the information shared with parents. In the US, an emphasis on the parent’s entitlement to know is leading practitioners towards reporting results relating to a large number of specified childhood conditions.18 Practitioners in the UK and Europe have tended towards a more targeted approach, with the focus on determining the cause of a child’s current ill health. However, this is changing: parents of children participating in the UK’s 100,000 Genomes Project (see Box 1) can opt to find out whether their child has several additional gene changes that can cause childhood conditions, as well as those relating to their existing condition. Concerns have been raised by the British Society for Genetic Medicine about this becoming routine NHS practice without the consequences for patients and healthcare professionals first being properly evaluated.

Some parents of children involved in genomic research have expressed a strong desire to receive a broader range of health-related results, irrespective of whether or not the results are uncertain, or relate to childhood or adult conditions, and whether or not there are known treatments. There is no UK legislation that would prevent genome sequencing companies from sharing this information with parents. It has even been suggested that clinical laboratories could have a legal obligation to provide individuals with their ‘raw’ genomic data on request.

Should all babies have their genome sequenced at birth?

The UK National Screening Committee advises the Government on NHS screening programmes. It stipulates that screened-for conditions must be serious and treatable, the test must be precise, and there should be evidence that screening will reduce ill-health or death. This would rule out using whole genome sequencing to look opportunistically for a wide range of different kinds of genetic conditions in all babies. However, there is debate about whether genome sequencing could be used to expand NHS newborn screening to include additional specific genetic conditions, and how the benefits and harms of screening programmes should be weighed. Some researchers suggest that notions of the benefits of newborn screening are evolving and could include providing parents with information relevant to other children they might go on to have. Others argue that only by expanding the newborn screening programme can evidence of benefit be amassed, particularly for rare diseases.*

*See discussion in Taylor-Phillips et al. (2014) The ethical, social and legal issues with expanding the newborn blood spot test, pp29-31. It should be noted that whole genome sequencing cannot replace some newborn screening tests, such as the test for congenital hypothyroidism which measures hormone levels.

How can parents be supported to make informed choices?

Facilitating informed choice in the context of genome sequencing is challenging. Tests offered as part of screening programmes are often seen by parents as routine or automatic, and healthcare professionals caring for sick babies might not have specialist genetics knowledge to help talk parents through their options. Commercial providers have been criticised for providing misleading information and claims about their tests in some other areas of genetic testing.* There are calls for standardised catalogues of disease-causing genes, for training to help doctors interpret genomic results, and for genetic counselling to be informed by the experiences of people with genetic conditions and their families.** Other sources of information for parents, such as websites and parenting manuals, could also play a role in informed decision making.

What might be the impact on treatment and care?

Using whole genome sequencing to diagnose a sick baby could help reduce a long and distressing journey of tests, and inform decisions about appropriate clinical care, be that active treatment or palliative care. However, there is a risk of false positive results that might result in unnecessary or inappropriate treatment. Even if a genetic condition is diagnosed, the prognosis can be uncertain, meaning genome sequencing will not always help families and healthcare professionals to decide on the best care.

If a gene change associated with a particular disease is found in an apparently healthy baby, it might enable preventative action to be taken. But there is often no certainty that the baby will become ill, and it has been suggested that this kind of result could adversely affect bonding between the parents and child in what otherwise would have been a care-free period.

How should genomic information be stored and accessed?

Babies who have had their genome sequenced at birth might grow up to find that their genetic data has been stored in some format. They might want to access this themselves. Some genome sequencing companies (See, for example, www.suregenomics.com and www.veritasgenetics.com) refer to genome sequencing as a resource for life and offer to regularly re-analyse their customers’ data in light of new genetic knowledge. Within the NHS, discussions are taking place on what kind of new knowledge would warrant re-contacting a patient who has had genomic testing, and whose responsibility this would be.* However, as sequencing standards and IT systems change over time, it is possible that today’s sequencing data will be too crude to be of use in a few years’ time.

*These questions are currently being considered as part of an ESRC-funded project led by Professor Susan Kelly at the University of Exeter. See: Dheensa S et al. (2017) A ‘joint venture’ model of recontacting in clinical genomics: challenges for responsible implementation Eur J Med Genet 60: 403-9.

Other parties – such as family members, researchers, and companies – might have an interest in accessing genomic information. There are debates about the ownership and control of genomic information, with some researchers suggesting a public ownership model is most appropriate. It is recognised that NHS care could be greatly improved by encouraging research activity on health data, but achieving this with the support of the public requires careful thought. Data governance and access arrangements have been developed by the 100,000 Genomes Project. The Nuffield Council on Bioethics has recommended that there should be public consideration of whether these arrangements represent the optimal model before they are used as a template for similar initiatives. The transparency of the data handling activities of some genome sequencing companies has been found to be lacking.

What could be the implications for wider society?

There are differences of opinion about whether an increased uptake of genome sequencing would lead to more positive or more negative views of genetic variation, disability, and poor health. Some caution that if genome sequencing becomes associated with palliative care this might send a harmful message to people with genetic conditions and their families, and fuel distrust toward the use of genetic technologies in clinical care. It has been suggested that population genome screening should not be contemplated without first tackling discrimination, exclusion, and negative societal attitudes experienced by disabled people (see also Nuffield Council on Bioethics (2017) Non-invasive prenatal testing: ethical issues.

Increased uptake of genome sequencing at birth could lead to the creation of a population-wide genome database. As well as a resource for research, such a database could have a myriad of other possible uses, such as crime detection, border control, and insurance and employment screening. These kinds of uses of genomic information are controversial and have been the subject of academic and public debate. Proposals to create a comprehensive, UK-wide police DNA database have raised concerns about balancing the protection of individual liberty with the need to prevent crime. Using DNA databases for employment or insurance purposes is widely thought to represent an unjustified intrusion of privacy.*

*See, for example, Human Genetics Commission (2002) Inside information: balancing interests in the use of personal genetic data; GeneWatch (2013) A DNA database in the NHS: your freedom up for sale?

What could be the implications for the NHS?

There are concerns about the ability of the NHS to deliver an effective genomics service. Deciding which patients will benefit from genomic testing, obtaining consent for testing, and interpreting results take specialist knowledge and time, and remain a significant challenge in mainstream medicine.* NHS genetics laboratory services will also play an important role, but there is uncertainty about how they will be configured in the future. If whole genome sequencing was offered to parents of all newborn babies, the scale of counselling and other NHS services required might be unmanageable.