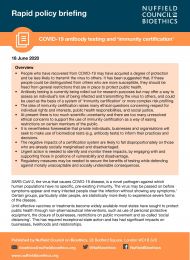 This rapid policy briefing looks at the ethical questions raised by 'immunity certification.' 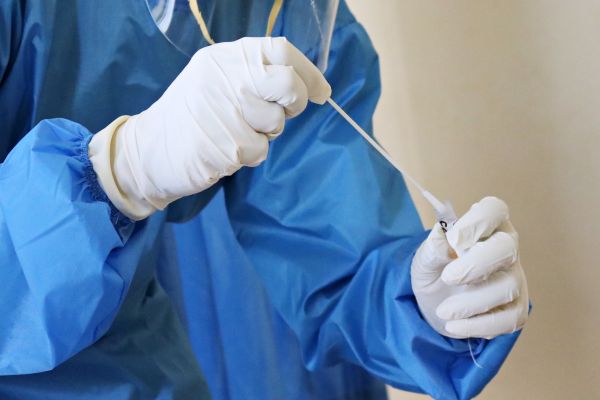 In normal circumstances, taking a biomedical test is a voluntary act. Having a meaningful choice, however, depends on there being a range of options with tolerable consequences available. The context in which testing is offered may, for example, put pressure on individuals to conform with an expectation that they should be tested. The choice to decline testing may raise suspicions in others or lead to stigmatisation. Testing offered in the context of employment (even if the primary purpose is research) can put pressure on employees owing to the hierarchical power structures in most workplaces; co-workers who have adopted organisational norms may also exert peer pressure to conform. Biological risk markers fall into a ‘special category’ of personal information.11 If pressure exists to take a test, similar pressure is likely to exist to disclose the results. Again, others will make inferences from an individual’s unwillingness to disclose their result if disclosure becomes a social norm, and those who do not comply with the norm may be stigmatised. The normalisation of testing is important, arguably, less because of the somewhat abstract value of personal autonomy than because of the consequences of test results. If a test result becomes a condition of access to goods or services, or to carry out certain professional duties, it will have significant practical consequences.

Largely due to the effectiveness of lockdown restrictions, the number of those who have been infected and recovered from COVID-19 in the general UK population has been kept at a level that makes it implausible that they should or could carry the burdens of national economic productivity on behalf of those who remain susceptible. It also seems improbable that there will ever be enough immunologically protected individuals to achieve ‘herd immunity’. Testing and certification may, nevertheless, have a function in public policy, for example to waive quarantine restrictions on incoming international travellers.

Testing could also, however, be used in private contexts, as a condition of access to commercial goods or services (e.g. to be admitted to a venue) or for certain professional duties (e.g. dealing face-to-face with customers). This is likely to induce people to seek out tests privately and to stimulate a commercial testing market. A proliferation of non-standard tests entering use creates incentives to ‘game’ tests to get the desired result (perversely tending to make poorer performing tests more economically valuable), or to dissemble, misreport or fake test results. Private testing potentially enables individuals to seek personal benefits while externalising the associated risk. Individuals may be prepared to accept lower test performance characteristics to inform decisions about their own behaviour than those judged appropriate to protect public health.

Employers may prefer to employ or deploy seropositive workers, believing they are less likely to fall sick or to infect co-workers or customers. An immune certified workforce may offer businesses a commercial or reputational advantage over competitors. Pursuing these incentives could lead to major social upheaval (as seronegative employees potentially lose opportunities to seropositive colleagues or applicants) and create coercive and stigmatising work environments. It could also create perverse incentives for people (particularly those who are unemployed, or who were dismissed or furloughed as a result of the pandemic) deliberately to expose themselves to infection in order to obtain a positive result. By doing so they may unintentionally contribute to the health crisis by transmitting the virus to others and requiring medical care.

These effects are likely to fall disproportionately on those who are already socially marginalised and disadvantaged. The lockdown has had a disproportionate impact on workers in low-paid sections of the economy, depriving them of income if they remain at home or forcing them to risk exposure if they are among the key workers who have continued to work (groups in which those from Black, Asian and minority ethnic backgrounds are significantly overrepresented). Positive tests may be used to require sections of the workforce to return to work, impacting unequally on those who are unable, through lack of wealth or power, to make the choice for themselves. Those with precarious incomes and working in low paying jobs, often in the service or industrial sector, are already more likely to experience social determinants of poorer health (unemployment, poor quality housing, less personal space, etc.), and worse outcomes of SARS-CoV-2 infection, than those in more privileged groups. Selective uses of certification are more likely to compound than redress these structural disadvantages and to add to the social stigmatisation of these groups.

The form of certification also creates both commercial and political opportunities. Technologies, such as smartphone apps, that have advantages of resistance to fraud also have the potential for expanded functionality, for example collecting data for disease surveillance and epidemiological research. They also have the potential to be used for identity verification, more sophisticated risk profiling (rather than simply inscribing the result of a single test) and generalised surveillance. Once testing is available for one purpose (for example, public health surveillance), incentives to use it for additional purposes are likely to emerge.

If access to goods and other benefits are attached to the use of a particular form of technology, the technology is more likely to be adopted voluntarily by those who have access. This can easily lead to widespread diffusion and embedding of proprietary technologies, especially if they are endorsed by Government. Access to and acceptance of technology are not, however, equally distributed and the choice of technology may exclude or deter individuals and groups from obtaining the potential benefits available.

The question of protecting freedoms must, therefore, be addressed at the level of policy (i.e. the uses to which test results may be put) rather than simply at the level of individual choice (i.e. ensuring that tests are taken and results shared voluntarily). Regulatory measures may be needed to secure the benefits of testing while defending against morally unacceptable and socially undesirable consequences.