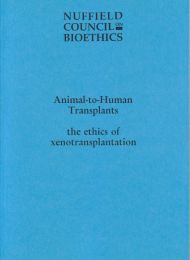 At the time of this report, attempts were being made to develop animal organs that can be transplanted into humans. Both pigs and, in the US, baboons were being developed for transplantation. This report considered the ethical concerns raised by such developments.

The Working Party concluded that development of xenotransplantation should continue, subject to rigorous regulation. This conclusion was justified by the prospect that xenotransplantation might be able to significantly supplement the present inadequate supply of human organs for transplantation, ultimately saving human lives. It was emphasised that the needs of patients could not be met effectively at present.

Early patients in trials of xenotransplantation would need special consideration. Their consent would need to be sought with great care and the report emphasised the requirements of an estimation of the likely success, attendant risks and subsequent quality of life.

The report concluded that there were a number of issues to be resolved. The UK has afforded special protection to primates. In matters of practice, the report concluded that the role of the Home Office’s Animal Procedures Committee may need to be reviewed to ensure that the Animals (Scientific Procedures) Act 1986 sets the appropriate standards in the rearing of animals as sources for xenotransplantation.

Non-primate species should be regarded as the source animals of choice for xenotransplantation. It viewed the use of pigs and their necessary genetic modification as ethically acceptable.

An additional major concern was the possible transfer to humans of new infectious diseases. A regulatory framework to control the safety and quality of animal organs and tissue for xenotransplantation was called for. A code of practice, preferably internationally agreed, was recommended to specify which organisms should be excluded to qualify source animals to be designated as pathogen-free.

It was also considered necessary, as a matter of urgency, to determine what further scientific and experimental work was required before the first experiments on human beings could be justified. Such considerations should form part of the remit of the proposed advisory committee, which should also be responsible for the safety and quality of animal organs and tissue used in xenotransplantation.

A general regulatory regime for xenotransplantation should be established, which should be administered by a non-statutory advisory committee in the first instance.