A debate takes place in the House of Lords today recognising 2018 as the 40th anniversary of the birth of the first baby created by in vitro fertilisation (IVF). This was a landmark moment not only in assisted reproduction, but also in the way that public debate around developments in scientific and medical technologies would be conducted.

The birth of Louise Brown in 1978 led, following the Warnock Report of 1984, to the establishment of a regulatory system in the UK that has proved to be robust and effective in not only regulating and facilitating scientific and medical progress, but also encouraging constructive public debate which, in turn, contributes to a high level of public confidence.

Attitudes to IVF and the many related treatment options have changed significantly over the four decades that have now elapsed, and we are likely to see further change in future, and it is a characteristic feature of innovation in science and medicine that societal views and technological developments co-evolve. The debate in the House of Lords prompted me to reflect on some of the important challenges that lie ahead for reproductive medicine:

The wider availability of fertility treatment services, combined with changing social attitudes to parenting by same-sex couples, single parents, and to people achieving parenthood later in life, have opened up the possibility of a new kind of parenthood for many couples and individuals who in the past would have been obliged to accept the impossibility of creating their own family.

The law has adapted and changed in response to changing attitudes. For example, in 2005 the law shifted away from anonymous donation to give donor-conceived people the right to access information about their donor at the age of 18. The Nuffield Council on Bioethics explored how this was working in practice in our 2013 report on donor conception. We concluded that the state has an ethical responsibility to ensure that appropriate support for donor-conceived people, their families and donors is available at all stages where there is a need.

One particular challenge that lies ahead is in relation to the freezing and storing of eggs for later use in assisted reproduction. This is increasingly used by women who wish to have children later and ‘insure’ against natural fertility loss with age – often called ‘social egg freezing’. Figures out this week show that there were 1,310 egg freezing cycles in 2016 – a 460% increase from 2010. However, where women over the age of 40 are freezing their eggs, the likelihood of a future pregnancy is very slim, raising questions about the ethical responsibilities of IVF clinics. There is also pressure on Parliament to extend the current ten-year storage limit for frozen eggs.

Scientific understanding of fertility and disease has been greatly advanced by research using human embryos, regulated in the UK by the HFE Act.

The statutory time limit of 14 days for maintaining human embryos in culture has been brought into question since the publication of research in 2016 that suggested, for the first time, it could be possible to culture embryos for longer than 14 days.[1]

The Nuffield Council on Bioethics held a workshop with a range of people to discuss the ethical issues that would be raised by an extension of the legal time limit, and in August 2017 published a discussion paper setting out different viewpoints. Whilst the case has yet to be made conclusively that there are persuasive reasons to review the time limit, the discussion continues. This is an issue to which Parliament might need to return in the near future.

Increasing scientific understanding of genomics, and increasing access to our own personal genetic information, brings new reproductive decisions and responsibilities for parents and for medical professionals.

Heritable genome editing interventions could become an option that prospective parents might wish to consider alongside IVF, to influence particular characteristics in their future children. Such interventions involve making an edit(s) to the DNA of an embryo before it is transferred to the womb, or to the DNA of a sperm or egg cell (or its precursor) before fertilisation. Initially, this might involve preventing the inheritance of a specific genetic disorder, although a change in the law would be required to permit this. If the technology develops further, there would be the potential for it to be offered for a wider range of goals.

The Nuffield Council on Bioethics’ recent report on genome editing proposes two overarching principles to guide any possible future use of heritable genome editing interventions, in order for them to be ethically acceptable. We suggest interventions must be intended to secure, and be consistent with, the welfare of the future person, and they should not increase disadvantage, discrimination or division in society. Clearly, further discussion on exactly what this would mean in specific situations is needed. The science is moving rapidly, and the time to engage in the public debate is now.

These challenges focus on the scientific and social developments that are happening now, or those we know are on the horizon. New issues and treatments in the field of reproductive medicine will undoubtedly present themselves in future. We will be doing what we can to encourage and contribute to inclusive public discourse and ethical debate to ensure science and medicine progresses in a way that reflects, or is at least consistent with, public values.

The World Health Organization (WHO) has today published the findings of its Expert Advisory Committee on Developing Global Standards for Governance and Oversight of Human Genome Editing.

The Consensus Study Report of the International Commission on the Clinical Use of Human Germline Genome Editing convened by the US National Academies of Medicine and Sciences and the UK’s Royal Society was published on 3 September.

Joint statement on the ethics of heritable human genome editing

We - jointly with the French and German ethics councils - call on governments and stakeholders around the world to put ethical considerations at the core of any future discussion and of the development of global governance of heritable genome editing.

Press release: Joint Statement of Ethics Councils from France, Germany and the United Kingdom on the Ethics of Human Heritable Genome Editing

Governments and stakeholders around the world are urged to put ethical considerations at the centre of any developments in global governance of heritable human genome editing, in a new statement published today.

From time to time I have posted updates on this blog about the evolving international discussion surrounding human heritable genome editing...

A genome editing year: developments since the Nuffield report

A lot has happened since we published our report Genome editing and human reproduction: social and ...

Call for a global moratorium on heritable genome editing

Yesterday in an article in Nature, a group of scientists and ethicists from seven countries called f... 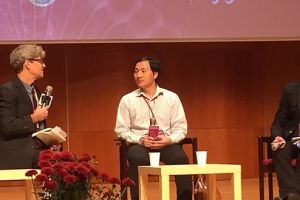 Today, the media has reported that gene-edited babies have been born in China. If these reports are ...