In 2005, the Nuffield Council on Bioethics published a ground-breaking report on the ethics of animal research following a long and challenging inquiry. The report included a consensus statement that all members of the large and diverse working party signed up to, which we regarded as a significant achievement. The statement acknowledged that animals have been used in many types of research that have provided benefits to society, but that a world in which the important benefits of such research could be achieved without causing pain and suffering to animals must be the ultimate goal.

In preparation for a meeting of the Royal Society of Biology’s Animal Science Group that I was invited to speak to recently, I gathered my notes of the past 12 years to consider whether and how the situation has changed in that time.

One of the central themes of the Council’s 2005 report was the promotion and embedding of the 3Rs: the replacement, reduction and refinement of animal research. There have been several important developments in this area.

While our inquiry was still underway, the National Centre for the 3Rs (NC3Rs) was set up, with an initial income of around £700,000. This, as well as the extent of the activities it undertakes, has risen steadily, and the centre now has annual budget of around £10 million.

Concurrently, a European Directive on the protection of animals used for scientific purposes was adopted in 2010. The aim was to consolidate regulation, improve welfare and embed the principle of the 3Rs in research. The Animals (Scientific Procedures) Act 1986 was amended in 2012 to transpose the new Directive into UK law.

The second central theme of the Council’s report related to improving the availability of information about animal research and the facilitation of a fair debate. The imprisonment of leading members of violent animal rights groups in 2009 has enabled researchers to feel more safe in speaking about their work.

In 2010, the NC3Rs published the ARRIVE Guidelines on improving the reporting of animal research in journals. In 2014, the Concordat on Openness on Animal Research was launched by Understanding Animal Research, which 116 organisations have since signed, thereby committing themselves to being more open and honest about how and why they use animals in research.

In 2015, the statistics on scientific procedures on living animals begin to record the severity of the procedures every animal has experienced in its lifetime, which provides important information about the impact of research on animals. The majority of procedures in 2016 were classified as mild or ‘sub-threshold’ (58 per cent of experimental procedures and 96 per cent of genetically altered animals).

The developments described above show an increasing recognition at different levels of the importance of the 3Rs and the need for open debate. This is extremely positive. However, the number of animals used in research has not reduced – it has increased significantly.

The rise in overall numbers is primarily due to an increase in the creation and breeding of genetically altered mice, which counts as a procedure.

The NC3Rs suggest that the main drivers of this trend have been the prioritisation of specific research areas, new regulatory requirements, the availability of new technologies such as tools to genetically alter animals, and the continued reliance on animal models in many disciplines. The NC3Rs recently set out its vision for ensuring research trends in the UK do not lead to an increase in animal use or suffering in future.

There have been other changes in the landscape that we did not predict in 2005. Technical and scientific advances have expanded the utility of animals containing human material – so-called chimera animals – for studying human functions or disease, such as HIV.

Potentially, some types of research involving chimeras could raise ethical questions above those raised by animal research in general. For example, if human cells were implanted into the brains of animals, and this made them more effective models of human disease but altered their cognitive capacity, might this affect the morality of the research?

The Academy of Medical Sciences published a report on Animals Containing Human Material in 2011, which recognised the potential for research involving chimera animals to raise ethical concerns. In 2016, the Government accepted the Academy’s recommendations to classify research involving animals containing human material into three categories with different levels of oversight. Experiments that raise strong ethical concerns will be classified as Category 3 and will not, for now, be licensed.

A further development since 2005 is the change in focus on primate research internationally. Research involving primates is one of the most controversial and tightly regulated types of animal research in the UK. Yet it has been reported that China is positioning itself as a world leader in primate research, with the Chinese government investing US$3.9 million into the endeavour in 2014.

A recent report of the European Commission’s Scientific Committee on Health Environmental and Emerging Risks (SCHEER) made recommendations on how the 3Rs for primates in research should be advanced across Europe, with an awareness that further tightening of regulations here may lead to research transferring to other countries to the detriment of animal welfare.

Possible future work for the Council

In light of all this, the Council has (at least) two scenarios to consider. One is that the ethical issues covered in our 2005 report are still relevant and that we and others need to continue working towards our recommendations. Perhaps the Council could have a role in promoting interdisciplinary exchange across science, humanities and social science to help embed a culture of care and public engagement about animal research, as advocated recently.

An alternative scenario is that developments in science, or in the policy or social environment, mean the ethical issues raised by animal research have changed and there is a need for the Council to consider this topic again.If you have views on the role of the Council in this debate, I would be very pleased to hear from you on cjoynson@nuffieldbioethics.org.

Thank you to Alessandro Coatti, Policy Officer at the Royal Society of Biology, for his help in gathering information for this blog.

Animal research
Sign up to our newsletter
Back to Blog

This report seeks to clarify the debate on research involving animals and aims to help people think through the ethical issues that are raised. 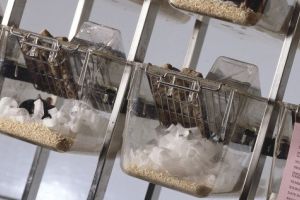