The Department of Health has launched a national survey to gather views from people diagnosed with dementia in the last two years, and their carers.

The survey is seeking views on people’s experiences of dementia, including diagnosis; the care and support they received after a diagnosis; and levels of understanding of dementia among local communities. In addition to the survey, the Department of Health has announced that it will provide an engagement toolkit to support local dementia groups and networks across England to have conversations about dementia in order to provide insight into what is working and what needs to improve.

The Council is encouraged by these developments, which are in line with recommendations made in its 2009 report for more action on providing education, training, and support to help people with dementia and their carers tackle ethical dilemmas they may face day-to-day.

Specifically, the Council urged the Department of Health to consider how education and support could be provided to assist ethical decision-making which balances the various interests of patients and of those who care for them. We therefore welcome the Government’s commitment to seeking people’s personal views and experiences, in order to understand what is working and what more could be done.

Also announced this week: Following a study published in Science Translational Medicine this week, it has been reported that a possible treatment for Alzheimer’s disease is progressing to a phase three clinical trial, with results due next year. If the results of the trial are shown to slow the pace of mental decline, then it could be the first treatment for Alzheimer’s to be licensed within a decade.

The Council’s report considered ethical questions raised by conducting research with people with dementia, and concluded that more should be done to make it easier for those who have expressed a wish to take part in research to do so. For example:

Find out more about the Council’s work on dementia.

Recognising the human rights of people with dementia during COVID-19

One of the most distressing aspects of the COVID-19 pandemic for me has been the treatment of older people living in care homes – and the uncomfortable spotlight cast on the way their fundamental needs and interests are often overlooked.

Treatment versus care for elders: a view from China

Council Member Ann Gallagher (Professor of Ethics and Care, University of Surrey) co-authored this b...

Yesterday was a pretty ordinary day for me. I woke up, left my flat, got a packed tube train with th...

This report concludes that we need to do more as a society to enable people to live well with dementia. 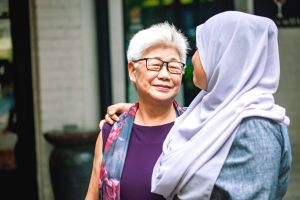