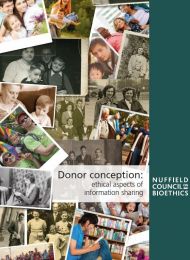 When thinking about the issue of information sharing between people affected by donor conception, we should start with a focus on people and relationships.

Everyone involved in donor conception has interests in how information is shared. These interests may include:

These interests are often expressed in terms of ‘rights’. However, by using instead the language of ‘interests’, we can first think about what we know about those interests, and then consider separately whether others have responsibilities to make sure those interests are protected and promoted.

It is not the role of this Working Party to make any judgment as to how important these interests ought to be in any given situation. However, the extent to which these interests are widely shared is relevant to the degree of responsibility that they may create in others. In turn, this is relevant in determining what action may be demanded on the part of public bodies to protect or promote these interests.

These interests arise in the context of relationships, and values that are widely regarded as important in contemporary family relationships in the UK include trust and honesty. ‘Openness’ in families is also valued by many. Openness, however, is not necessarily the same as honesty. In particular, choosing not to disclose private information is not usually considered to be dishonest.

Openness about donor conception should not be regarded as valuable in itself, but rather as important in so far as it improves family relationships, and adds to the well-being both of parents and of donor-conceived people.