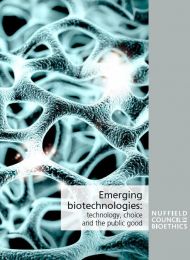 Emerging biotechnologies differ considerably in nature and purpose, but some common features in the way they evolve can be identified.

The term ‘biotechnology’ is used to apply to many different kinds of thing, including the following:

We characterise the emergence of a biotechnology as a process of bringing together knowledge, practices, products and applications into viable and productive relationships. The types of technologies that are considered in the report all involve the use, modification or creation of a biological system or process.

Examples of key areas in which significant advances are currently taking place include: