Ethical considerations in responding to the COVID-19 pandemic 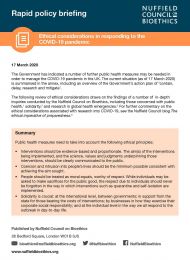 This rapid policy briefing outlines ethical principles that must be considered when developing public health measures in response to the COVID-19 pandemic.

Ethical considerations for individuals and companies

While the ethical considerations outlined above apply primarily to the decisions made by states in response to major threats to public health, such situations also have ethical implications for individual citizens, and for parts of the commercial sector. In particular, public health emergencies illustrate the need to behave in accordance with solidarity – recognising what we owe each other as fellow, equal human beings. While for many people contracting COVID-19 is likely to involve only mild illness, a significant minority of the population may experience serious illness, and some will die as a result. This places an ethical responsibility on everyone to take measures such as good hand hygiene seriously, and to comply with the policy of self-isolation even for quite minor symptoms – not necessarily for personal benefit, but to ensure that those who are most vulnerable to serious illness are protected from infection as much as possible.

The recognition of the needs of others that underpins solidarity is also important in other day-to-day behaviours, including in taking a balanced approach to stocking emergency provisions (for example in contemplation of the likelihood of being expected to self-isolate for a week or more) without panic buying in a way that deprives others of access to essential items. Other day-to-day aspects of solidarity include the importance of neighbours, family and friends providing informal support for those in need – particularly those who are unable to leave their homes to obtain basic necessities, or are left isolated and lonely because of shortages of care staff, or as a result of social distancing policies. It has been reported that thousands of people are joining local community groups to support vulnerable neighbours, from picking up shopping and medicines, to offering to teach music online. As noted above, trust is essential to support solidaristic behaviour on the part of the general public: trust in the Government and its approach to the emergency, and also trust that others will behave in ways that demonstrate, and do not undermine, solidarity.

Companies also have a duty to act in the public interest during emergencies, demonstrating corporate social responsibility in areas of their own influence. Examples of such action in the current outbreak include partnerships between social media companies, internet search engines, and governments to combat fake news and help ensure that accurate information (for example from the NHS, Public Health England, and the World Health Organization) is easy for people to find online. Major retailers are well-placed to support action against bulk-buying of key items, both through communicating clearly with their customers to reassure them that supply lines are open; and where necessary limiting the number of items that each customer can buy in one transaction. Online retail platforms such as Amazon and eBay also have a responsibility to take action against profiteering, where essential products such as hand sanitisers and protective equipment such as masks are being sold at highly inflated rates in response to shortages.