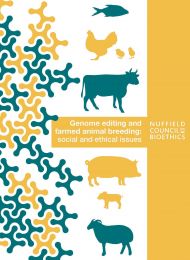 See chapter 2 of the full report

Animal welfare is a wider concept than animal health. It includes not just the physiological condition of the animal but the full range of experiences that constitute a good life. Various aspects of husbandry will affect animals’ welfare, such as their living conditions, how much space and exercise they have, what they are fed and how often, access to veterinary care, their ability to form social bonds with others of the same species, and the physical and psychological effects of common farming interventions such as de-horning, tail docking, and castration.

Breeding systems that have focused on developing productivity traits in the past (e.g. increased carcass size and litter size) have had many negative effects on animal health and welfare. For example, genetic selection for high egg production in laying hens has been shown to cause osteoporosis and put hens at increased risk of bone fractures.

As information and understanding of the effects of different farming and breeding systems have increased, there been some improvements in some aspects of the conditions in which animals are kept, and some progress towards environmental objectives in breeding programmes. However, standards vary across the world, and many aspects of animal health and welfare continue to present challenges to the food and farming system.

There are several risks to human health associated with farming and the consumption of animal products, including:

3. Challenges of demand and supply

Demand for animal products is increasing, not only because we have more people to feed as our global population rises, but also because worldwide, people are eating more meat. The supply is precarious though, particularly in areas where people are vulnerable to disruption e.g. as a result of political, economic, or climate instability. Two of the most important factors affecting supply of livestock are climate change (e.g. low rainfall and rising temperatures) and outbreaks of animal disease.

International trade is essential for most countries to secure a reliable supply of a variety of foods. The UK, for example, is not self-sufficient. It is a net importer of beef, poultry, pork, and lamb.

Reliance on international trade exposes a national food system to risks: the fluctuation in global markets can affect food supplies and price stability. The food supply, both in terms of the livelihoods of farmers and the choice of food available to consumers, is highly influenced by major food retailers. Livestock and fish farming are major components of the global food supply, but are increasingly being challenged because of their contribution to environmental damage (see below).

What people eat depends on a variety of factors including social, cultural, religious, moral, political, environmental, and economic factors.

If more countries start to follow this trend, thechallenge will be to avoid the negative impacts (e.g. for public health, communities, and the welfare of farmed animals) that accompanied historical rises in meat consumption in industrialising countries.

This set of challenges includes:

The way in which the global food and farming system is organised and run makes it morally indefensible and unsustainable in its present form.

The ways in which we produce and consume food will have to adapt in order to provide a secure and sustainable supply of nutritious food for our growing global population.