Novel techniques for the prevention of mitochondrial DNA disorders: an ethical review 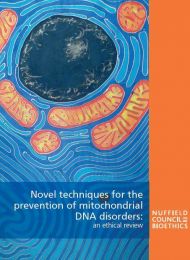 After considering a number of ethical questions, and having heard from a wide range of contributors, the Working Group identified a number of issues that require further consideration. The Council believes that continuing debate about these issues will be important, but it also reached a number of conclusions that the Government and others may wish to consider.

Due to the health and social benefits to individuals and families of living free from mitochondrial disorders, and where potential parents express a preference to have genetically-related children, on balance we believe that if these novel techniques are adequately proven to be acceptably safe and effective as treatments, it would be ethical for families to use them, if they wish to do so and have been offered an appropriate level of information and support.

Given the above and subject to the appropriate oversight, we believe that as a research objective it is ethical to gather further information about pronuclear transfer and maternal spindle transfer in order that they can be considered for treatment use.

Treatment as part of a research trial

We believe that in the first instance, novel techniques such as pronuclear transfer and maternal spindle transfer (or any comparable future treatment) should only be offered as part of a research trial in centres specialising in mitochondrial disorders. Consent to follow up would need to be included as a mandatory part of parental consent to participation in the trial.

Families using such techniques should commit to allowing very long term follow-up of their children and families in order to further knowledge about the outcomes of these techniques. To support this aim we would recommend the creation of a centrally funded register of any such procedures performed in the UK, accessible to researchers over several decades.

Parentage of the child

Although the perception of the personal and social relationships created by egg or embryo reconstruction would be essentially a matter for the individuals concerned, it is the view of the Working Group that mitochondrial donation does not indicate, either biologically or legally, any notion of the child having either a ‘third parent‘, or ‘second mother’.

Regulation: status of the mitochondrial donor

The donor of mitochondria should not have the same status in regulation as a reproductive egg or embryo donor in all aspects. As part of this, we do not believe mitochondrial donors should be mandatorily required to be identifiable to the adults born from their donation.

The novel treatments under discussion were viewed by the Working Group as examples of germline therapies. The wider policy debate could benefit from a fuller discussion of the ethics of the different kinds of prospective and theoretical germline therapies than was possible within the remit of this report. This would include potential therapies that would act on the cell nucleus with heritable effects, and therapies which might involve nuclear transfer in its various forms.