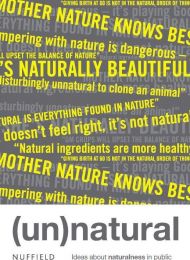 When people describe areas of science, technology or medicine as natural or unnatural, often they are making claims about it being good or bad, or right or wrong. Complex ideas often underlie uses of these terms. The Council wanted to gain insight from poets to explore these ideas, and to use poetry to encourage a wider audience to engage in the debate.

We collaborated with Apples and Snakes, England’s leading organisation for performance poetry, to commission a poet and run a poetry competition exploring ideas about naturalness in bioethics debates.

We commissioned the poet Kayo Chingonyi to help explore ideas about naturalness in bioethics debates.

After spending some time with the Nuffield Council team, Kayo published a first poem in September 2015, followed by four new poems published on 30 November 2015. Read the complete set of Kayo’s works in the links to the left or below:

Kayo Chingonyi was born in Zambia in 1987, moving to the UK in 1993. He holds a BA in English Literature from The University of Sheffield and an MA in Creative Writing from Royal Holloway, University of London and works as a writer, events producer, and creative writing tutor.

Kayo has also been invited to read from his work at venues and events across the UK and internationally. In 2012 he represented Zambia at Poetry Parnassus, a festival of world poets staged by The Southbank Centre as part of the London 2012 Festival. He was recently awarded the Geoffrey Dearmer Prize and shortlisted for the inaugural Brunel University African Poetry Prize.

Find out more about Kayo at: https://kchingonyi.wordpress.com/bio/