The ethics of patenting DNA: a discussion paper 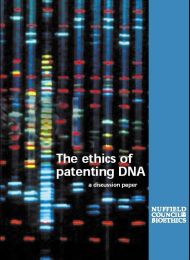 This report considers whether the DNA patent system is achieving its aims of stimulating innovation for the public good, and rewarding people for useful new inventions.

We distinguish four different uses to which DNA sequences can be put:

We note that patents that assert rights over DNA sequences and their uses are, in some cases, supportable, but in others, should be treated with great caution.

We consider that the adoption of the recommendations that we put forward here will serve to guide patent offices and the courts to a more rational use of the system which reserves patent protection for those patents that assert rights over DNA sequences that reflect a significant contribution by the researcher.

Criteria already in place within existing patent systems for the granting of patents, particularly the criterion of inventiveness, be stringently applied to applications for product patents which assert, inter alia, rights over DNA sequences for use in diagnosis. We recommend that the European Patent Office (EPO), the United States Patent and Trademark Office (USPTO) and the Japan Patent Office (JPO) together examine ways in which this may be achieved.

If this recommendation is implemented, we expect that the granting of product patents which assert rights over DNA sequences for use in diagnosis will become the rare exception, rather than the norm.

We consider the grant of use patents for diagnostic tests and conclude that the protection by use patents of specific diagnostic tests which are based on DNA sequences could provide an effective means of rewarding the inventor while providing an incentive for others to develop alternative tests.

We consider that, in the case of patents that have been granted for diagnostic tests based on genes, compulsory licensing may be required to ensure reasonable licensing terms are available to enable alternative tests to be developed.

We consider, that in general, the granting of patents which assert rights over DNA sequences as research tools should be discouraged. We have taken the view that that the best way to discourage the award of such patents is by stringent application of the criteria for patenting, particularly utility.

We consider that once a gene which is associated with a disease is identified, the use of the relevant DNA sequences in gene replacement therapy, to alleviate the effects of mutations in that gene, is obvious (particularly when such use is claimed on a purely speculative basis).

Protection by product patents should seldom be permissible. We believe that patent protection should be concentrated on developing safe and effective methods of appropriate gene delivery. This is where the real inventiveness and investment will be required, rather than in simply defining the sequence of the genes to be used in treatment.

We take the view that while rights asserted over DNA sequences which are used to make new medicines that are therapeutic proteins are generally acceptable, they should be narrowly defined. By this we mean that the rights to the DNA sequence should extend only to the protein described.