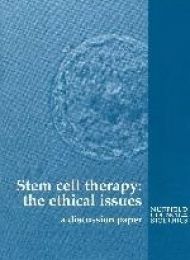 We do not consider that concerns about inappropriate incentives resulting from a potential benefit deriving from the establishment of an EG (embryonic germ) cell line are so great that the donation of fetal tissue for such purposes should be prohibited.

We suggest that the provisions in the Polkinghorne Review designed to separate the decision to have an abortion and the decision about any use which can be made of the fetal material are sufficient to meet such concerns.

We suggest that if specific consent is required for the donation of an embryo where an immortal cell line is to be produced from it, it would be only consistent to require special consent for the production of such a cell line from fetal tissue also.

We suggest that the question of consent for the derivation of EG cells from donated fetal tissue be considered by the CMO’s Expert Group in the context of the current regulatory framework.

We endorse the position taken in the Polkinghorne Review that research should not be construed so narrowly as to exclude proposals for making therapeutic use of fetal tissue and propose that a similar view should be taken on the derivation of EG cells.

We recommend that any consent obtained to the use of fetal material in the establishment of EG cell lines should also cover the use of such cell lines in therapy.

The reported use of cow oocytes for the culture of ES cells in the US raises the question of whether blastocysts created in this way would fall under the regulation of the HFE Act.

We recommend that the HFEA seeks clarification of the regulatory status of this kind of research in the UK prior to any proposed amendment of the HFE Act.

However, we consider that the proposed creation of embryos using SCNT for research into the derivation of stem cells offers such significant potential medical benefits that research for such purposes should be licensed.

Research on cells in culture and animals should precede and inform any experiments on human embryos derived from SCNT.

Research involving embryos derived from SCNT is legally permissible if it is for one of the purposes set out in Schedule 2 of the HFE Act. We have recommended that Schedule 2 be amended to permit research involving embryos for the additional purpose of developing tissue therapies from the derived ES cells. If adopted, this recommendation would also permit research on embryos derived from SCNT to be licensed for the purpose proposed.

We consider that it would be unacceptable for an embryo derived from SCNT to be placed in a uterus and allowed to develop to the point where it could be aborted and the organs used.

We recommend that the granting of over-generous patents with broad claims in this important field should be discouraged.

Although we have no reason to believe that stem cell therapy would raise public health concerns, we recommend that expert advice be sought to evaluate the possible implications for public health.