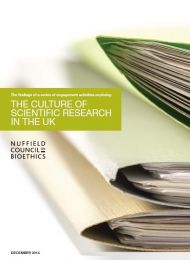 Three evidence gathering meetings with experts from specific fields were held to inform the discussions of the Steering Group on the culture of scientific research. The focus of the three meetings were:

An online survey was open from March to July 2014 and received 970 responses. The survey consisted of 26 questions that asked respondents to provide their views on various aspects of the culture of scientific research. The survey included a mixture of multiple-choice questions, some with the option to add comments, and questions that allowed free text answers.

Fifteen discussion events were co-hosted with universities between June and September 2014. The universities were chosen to ensure a geographical spread around the UK. Most of the events took the form of a 90-minute lunchtime seminar that was free to attend and open to anyone. The events involved a total of 63 speakers and chairs, and approximately 680 people registered to attend as participants.

Download more information about the events and a summary of the issues that were raised.

Discussion events were held at the following universities: