We suggest an ‘Intervention Ladder’ as a useful tool for analysing the ethical acceptability of different forms of encouragement for donating bodily material in various circumstances. 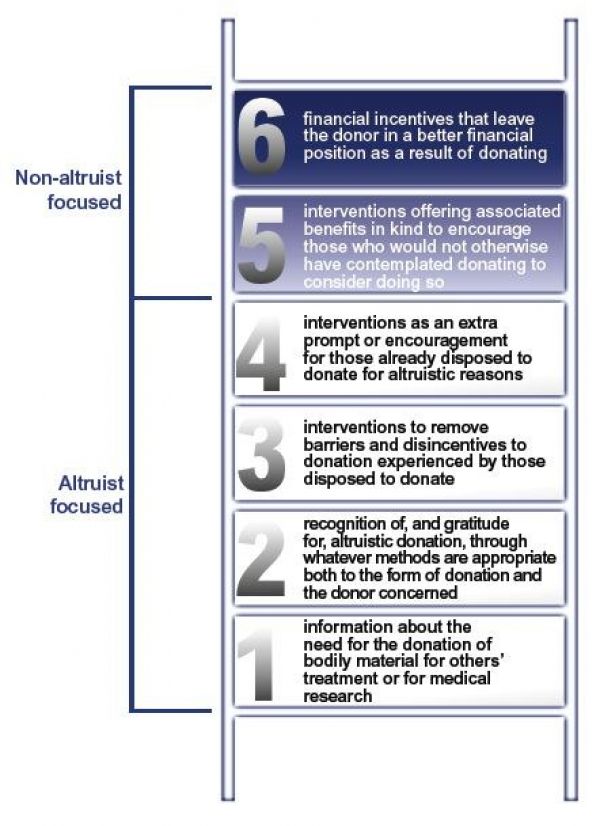 The first four rungs of the Ladder are all ‘altruist-focused interventions’, intended to stimulate people’s altruistic motivation. The two final rungs on the Ladder are nonaltruist-focused interventions. It is an ethically significant step to move on to either of these two rungs and scrutiny will be required to decide whether they may be ethically justified. Factors to consider include:

On organ donation, we conclude

Living organ donors should not receive payment other than the direct reimbursement of costs incurred by being a donor.

We suggest the introduction of a pilot scheme in which the NHS would meet funeral expenses for those who sign the Organ Donor Register and subsequently die in circumstances where they could become organ donors.

Robust research is needed on the effects of an opt-out system for organ donation if this is introduced in Wales, as currently planned, in order to obtain a clear evidence base for any proposals for change elsewhere in the UK.

Mandated choice and prompted choice systems (which should include the option of saying ‘no’) are ethical options for seeking advance authorisation for deceased organ donation.

On egg and sperm donation, we conclude

Lost earnings should be fully reimbursed for those donating eggs or sperm for others’ treatment, so that they are not left out of pocket.

Women who donate eggs for research, like healthy volunteers in clinical trials, undergo medical procedures that involve discomfort, inconvenience and potential risks to their health, in order to contribute to the common good of research. We suggest the introduction of a pilot scheme offering payment to those who are prepared to donate eggs for research purposes.

On volunteering for clinical trials, we conclude

Payment for participation by healthy volunteers in first-in-human clinical trials within the UK should be retained as ethically justified.